WE ARE OPEN as of May 11th. Following COVID-19 precautions, our offices will serve one client at a time. All staff available by phone/email

Find this article at:
go.ncsu.edu/readext?415413
— Written By Dustin Adcock

If you’re like me, at some point in your gardening years a simple little white caterpillar has gotten the best of you. Your squash vines have suddenly collapsed again! Squash Vine Borer is the larvae (hairless caterpillar) of a black moth. Generally late May to the first of June we see these black moths fluttering about the vines. 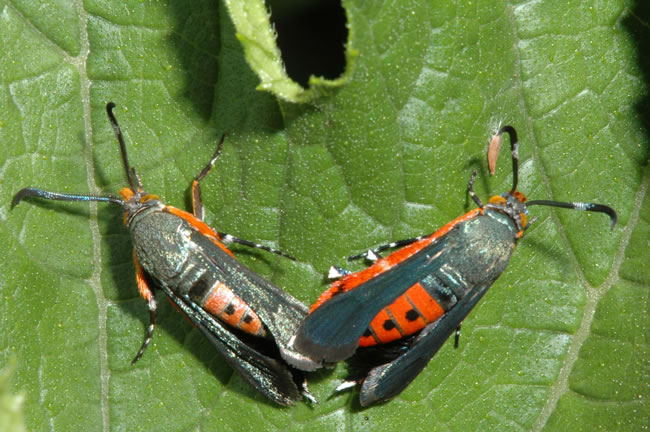 The moths will lay their egg on the ground next to the stem or on the stem itself. In hours after being laid, the borer caterpillar will penetrate the stem and begin feeding for about 4 weeks. The Borer causes the vine to wilt, collapse, and die rapidly. At this time, the Vine Borer will burrow in the ground 1-2 inches and pupate (Cocoon) over winter and emerge as a moth again next year.

Now for the good news. There are quite a bit of easy options to control this pest and its havoc. It is recommended that you use a few of these combined to get the best control.

1) Grow crooked-neck squash rather than straight-neck. Yes, that’s right. Research shows that the Vine Borer has a preference. However, Hubbard squash had the greatest appeal to the borer…so be warned. Butternut and Cushaw squash were the most resistant. (Grupp, n.d.)

2) Use aluminum foil or a small plastic cup to make a protective collar around your vines early on. Make sure it is at least 2 inches high on the vine and somewhat buried in the soil.

3) Spray the vines early with B.t., a natural bacteria that feeds on caterpillars. Make sure to apply generously on a cloudy day or in the evening. Re-apply, if it rains within 24hrs of the application.

4) If the vines are already infected, try cutting a slit where you see frass (sawdust like excretion) from the Borer and remove the Borer, then mound soil over the wound to induce rooting. Some trials have had success with injecting B.t. into a stem near the frass to kill the Borer.

5) Place a rowcover (mesh fabric) over the plants until right at first bloom.

6) Remove any Borers or dead, infected vines and destroy by burning.

7) Till soil at the end of the season to kill any burrowed cocoons/pupae. But, make sure to mulch or sow a cover crop (wheat, rye, clover, oats, etc) a few weeks later to protect your soil during fall and winter.

Looking for Our Email Lists?

We have a list of all of our email newsletter offerings.